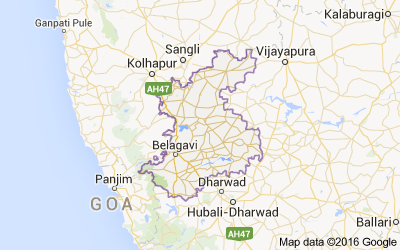 Belagavi, also known as Belgaum and Belagaon is one the fastest growing cities in Karnataka. Being a district adjoining Maharashtra, Goa and Karnataka, it is a culturally and financially vibrant city. The city lies on NH4 almost midway between Mumbai and Bengaluru and is connected to Panajim via NH4A. Many other state highways link the city to neighbouring towns and districts of all three states.  It is well connected via public and private transportation. It is has a modern railway station and is connected via railways on the Sangli-Londa line of South-Western railways.  It is also connected by air via the Sambra airport where domestic flights operate between Mumbai, Bengaluru and soon to be launched to Hyderabad.

Being close to the western Ghats, The city enjoys comfortable climatic conditions throughout the year.

HOW TO REACH VENUGRAM HOSPITAL :

It is Approximately 6.5 km from the City Bus stand, 4 km form the railway station and 17.5 km form Sambra airport.